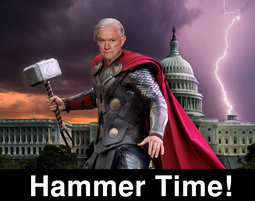 In a move that will certainly make the heads of CNN and the rest of the liberal media explode, President Trump has called on Attorney General Jeff Sessions to take bold steps to end the Mueller Russia probe once and for all.

..This is a terrible situation and Attorney General Jeff Sessions should stop this Rigged Witch Hunt right now, before it continues to stain our country any further. Bob Mueller is totally conflicted, and his 17 Angry Democrats that are doing his dirty work are a disgrace to USA!
— Donald J. Trump (@realDonaldTrump) August 1, 2018


The President then followed up with a powerful quote from Alan Dershowitz on this entire situation:

“FBI Agent Peter Strzok (on the Mueller team) should have recused himself on day one. He was out to STOP THE ELECTION OF DONALD TRUMP. He needed an insurance policy. Those are illegal, improper goals, trying to influence the Election. He should never, ever been allowed to........
— Donald J. Trump (@realDonaldTrump) August 1, 2018

.....remain in the FBI while he himself was being investigated. This is a real issue. It won’t go into a Mueller Report because Mueller is going to protect these guys. Mueller has an interest in creating the illusion of objectivity around his investigation.” ALAN DERSHOWITZ....
— Donald J. Trump (@realDonaldTrump) August 1, 2018


Finally, Trump sent a powerful tweet that calls out the rigged FBI and the “TOTAL HOAX” of the ‘Russian Collusion’ conspiracy:

Russian Collusion with the Trump Campaign, one of the most successful in history, is a TOTAL HOAX. The Democrats paid for the phony and discredited Dossier which was, along with Comey, McCabe, Strzok and his lover, the lovely Lisa Page, used to begin the Witch Hunt. Disgraceful!
— Donald J. Trump (@realDonaldTrump) August 1, 2018


Read More
And even More