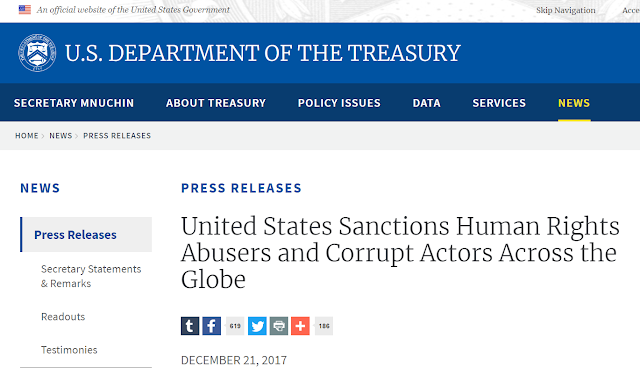 Thanks to @tracybeanz for this awesome tip: 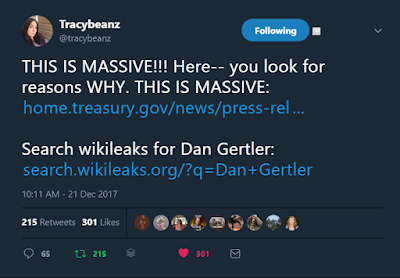 Washington – Today, the Trump Administration launched a new sanctions regime targeting human rights abusers and corrupt actors around the world.  Building on the Global Magnitsky Human Rights Accountability Act passed by Congress last year, President Donald J. Trump signed an Executive Order (Order) today declaring a national emergency with respect to serious human rights abuse and corruption around the world and providing for the imposition of sanctions on actors engaged in these malign activities.  In an Annex to the Order, the President imposed sanctions on 13 serious human rights abusers and corrupt actors.  In addition, the Treasury Department’s Office of Foreign Assets Control (OFAC), acting on behalf of the Secretary of the Treasury, in consultation with the Secretary of State and the Attorney General, imposed sanctions on an additional 39 affiliated individuals and entities under the newly-issued Order.

“Today, the United States is taking a strong stand against human rights abuse and corruption globally by shutting these bad actors out of the U.S. financial system.  Treasury is freezing their assets and publicly denouncing the egregious acts they’ve committed, sending a message that there is a steep price to pay for their misdeeds,” said Secretary of the Treasury Steven T. Mnuchin.  “At the direction of President Trump, Treasury and our interagency partners will continue to take decisive and impactful actions to hold accountable those who abuse human rights, perpetrate corruption, and undermine American ideals.”

As a result of today’s actions, all of the assets within U.S. jurisdiction of the individuals and entities included in the Annex to the Order or designated by OFAC are blocked, and U.S. persons are generally prohibited from engaging in transactions with them.  Further details on these designations are included below.

Yahya Jammeh (Jammeh), the former President of The Gambia who came to power in 1994 and stepped down in 2017, has a long history of engaging in serious human rights abuses and corruption.  Jammeh created a terror and assassination squad called the Junglers that answered directly to him.  Jammeh used the Junglers to threaten, terrorize, interrogate, and kill individuals whom Jammeh assessed to be threats.  During Jammeh’s tenure, he ordered the Junglers to kill a local religious leader, journalists, members of the political opposition, and former members of the government, among others.  Jammeh used the Gambia’s National Intelligence Agency (NIA) as a repressive tool of the regime – torturing political opponents and journalists. Throughout his presidency, Jammeh routinely ordered the abuse and murder of those he suspected of undermining his authority.

During his tenure, Jammeh used a number of corrupt schemes to plunder The Gambia’s state coffers or otherwise siphon off state funds for his personal gain.  Ongoing investigations continue to reveal Jammeh’s large-scale theft from state coffers prior to his departure.  According to The Gambia’s Justice Ministry, Jammeh personally, or through others acting under his instructions, directed the unlawful withdrawal of at least $50 million of state funds.  The Gambian Government has since taken action to freeze Jammeh’s assets within The Gambia.

As President of Nicaragua’s Supreme Electoral Council, drawing a reported government salary of $60,000 per year, Roberto Jose Rivas Reyes (Rivas) has been accused in the press of amassing sizeable personal wealth, including multiple properties, private jets, luxury vehicles, and a yacht.  Rivas has been described by a Nicaraguan Comptroller General as “above the law,” with investigations into his corruption having been blocked by Nicaraguan government officials. He has also perpetrated electoral fraud undermining Nicaragua’s electoral institutions.

Dan Gertler (Gertler) is an international businessman and billionaire who has amassed his fortune through hundreds of millions of dollars’ worth of opaque and corrupt mining and oil deals in the Democratic Republic of the Congo (DRC).  Gertler has used his close friendship with DRC President Joseph Kabila to act as a middleman for mining asset sales in the DRC, requiring some multinational companies to go through Gertler to do business with the Congolese state.  As a result, between 2010 and 2012 alone, the DRC reportedly lost over $1.36 billion in revenues from the underpricing of mining assets that were sold to offshore companies linked to Gertler.  The failure of the DRC to publish the full details of one of the sales prompted the International Monetary Fund to halt loans to the DRC totaling $225 million.  In 2013, Gertler sold to the DRC government for $150 million the rights to an oil block that Gertler purchased from the government for just $500,000, a loss of $149.5 million in potential revenue.  Gertler has acted for or on behalf of Kabila, helping Kabila organize offshore leasing companies.  Read More...